I love learning and developing new knitting and crochet techniques.  Occasionally I will just pick up yarn and needles or hook, and play.  This can either be exhilarating, or extremely frustrating, depending on whether my idea "works" or not.  I will often start with an existing technique, and play a "What If?" game.  What would happen if I wrapped the yarn a different way, or combined elements of two different stitch patterns, or tried to imitate a knitting technique in a piece of crochet (or vice versa)...?


Earlier this year, I decided to use some yarn from my stash to make some fingerless gloves, which seem to be all the rage at the moment (The aforementioned gloves rapidly disappeared at the bazaar last weekend!).  I decided to crochet the gloves, but wanted to add some special touches to make them unique.


I had been playing around with crocheted foundation rows, and had come up with some interesting ideas.  A foundation row is used in place of the starting chain at the beginning of the work, and is basically a way of crocheting the chain and the first row simultaneously, which seems to avoid the problem of a tight chain at the beginning edge of the work.  This experimentation (a "beaded" foundation row which I hope to use in a future project) sparked the idea to try creating a scalloped foundation row to begin the gloves.  I liked the way this looked.  The great thing about this is that the same scalloped edging can be used at the other end of the gloves, as a standard edging.  What fun!

Sometimes I am too clever for my own good, though.  If I neglect to write out how I did a technique at the time that I create it, I may have a hard time deciphering it when I later try to duplicate it.  Last weekend, I picked up one of my products at the bazaar and said, "How did I do that...?"  Hopefully, I wrote it down, and maybe one day I will find it among the sheaves of scribbled-upon paper that comprise my pattern "library".
To continue my story, a couple of months ago, a lady convo'd me on Etsy to ask if she could buy the pattern for my fingerless gloves.  I told her I would try to get it ready to publish, but I didn't know if I had written down the pattern.  A vigorous search yielded no sign of a pattern.  So I pulled the gloves out of my stock so that I could re-crochet them.  True to form, when I examined the gloves, I asked myself, "How did I do that?"  It took me a couple of days to figure out what I had done!
But I finally did manage to recreate the gloves.  Here are a couple of photos of the finished product: 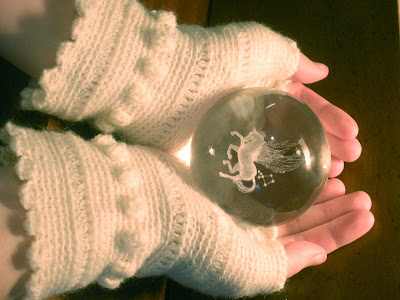 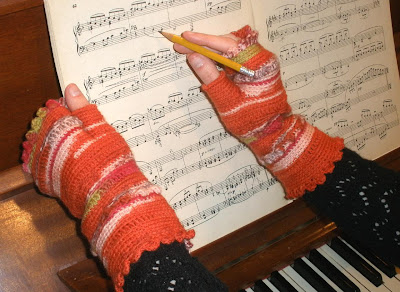 This is a beautiful pattern! The scalloped edging is really pretty.

I know what you mean about the need for documenting the steps you take in creating a pattern. Like you, I often forget what I did unless I took notes. Or if I did take notes, the trick is to find them.

I really need to find a better way to organize my pattern notes. So often, I just write them down on whatever is handy at the moment, so they tend to end up on random bits of paper.