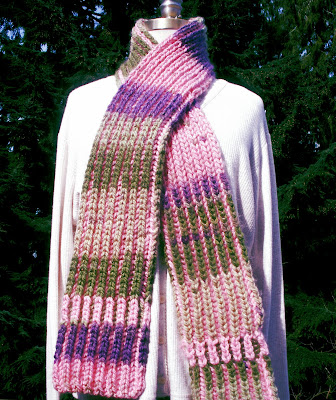 I am woefully behind in writing posts for this blog.  The new year has brought some new challenges for me, as well as a couple of bouts of a particularly nasty bug.  All this has not stopped me from knitting, however,  I have used my "down time" to try a couple of new brioche techniques.  After my first project, a two-color brioche scarf, I decided to do some more scarves to explore the technique further.

My second brioche scarf was made in a similar manner to the first (see previous post), with the main yarn on one side a solid pink, and the main yarn on the other side a variegated mix of greens, pink, and purples.  This time, however, instead of using a selvedge stitch on each edge, as I did in the first scarf, I worked the brioche stitch all the way to the edge on each side.  I'm not completely sure why, but I like this edge a little better than the selvedge stitch one.
I also tried switching the yarns to make a stripe of the opposite color, about 4 inches from each end.  This was not difficult to do...one just works the stitches on each side with the other side's color for as long as one wishes. 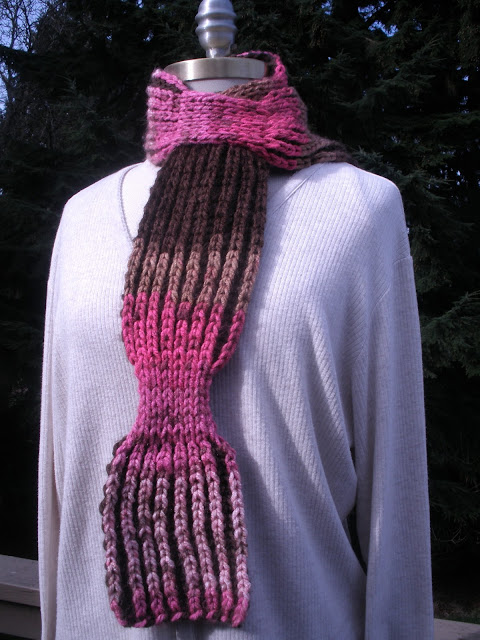 My third scarf was also worked with two yarns: this time, a dark brown for one side, and a variegated pink and brown for the other.  The thing that makes this scarf different is that I switched from brioche to double knitting at regular intervals.  This creates narrow, double-knitted slots in the scarf.  Basically, to transition from brioche to double knitting, stop wrapping the yarn around the needle between stitches, and position it so that it stays out of the way when you slip the stitch of the opposite color.  This way, you will end up with two layers of stockinette stitch fabric, one color on one side of the scarf and the other color on the other side. 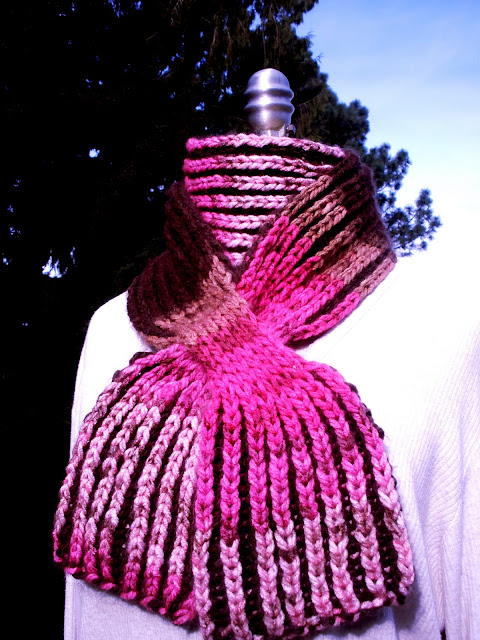 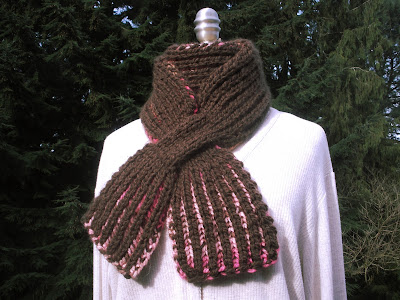 This scarf not only has a unique shape, but it also has the potential to be used as a "pass-through" scarf.  See the photos for some creative ways this scarf can be worn! 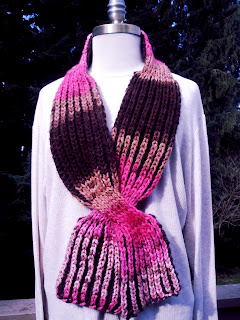 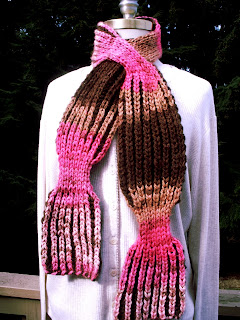 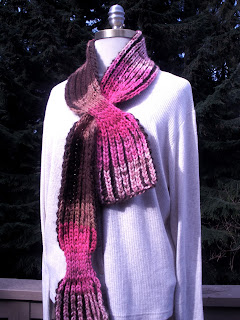 ﻿I am currently working on a baby blanket in brioche stitch, again using two-color brioche.  I have still barely brushed the surface of Nancy Marchant's book, Knitting Brioche:  The Essential Guide to Brioche Stitch.
Watch for these scarves to appear in my Etsy shop!

I like the second scarf with the double knitting key holes. You ahead of me in exploring the brioche stitch. I did just finish one in a solid color and have plans for one in two colors. You have to pay more attention in the two-color variety it seems.