Frugality seems to be ingrained deep in my nature.  I balk at paying full price, and love to shop at second-hand or thrift stores, to find things I can use at a reduced price.  So I often find myself hesitating at paying full price for yarn, especially since I began occasionally buying yarn wholesale.  But sometimes a yarn is just so special or so beautiful, that I allow myself to splurge a bit.

Last year, I found myself eyeing some balls of Patons Kroy Socks, a lovely variegated yarn with beautiful colorways.  I think it was even on sale, and I had a pattern to use it for.  But the problem was, that even on sale, I would have to pay twice as much to make this pattern, because the yardage was less per ball.  The yarn I have typically used for my Scalloped Crocheted Fingerless Gloves is Red Heart's Heart & Sole, which has 213 yds. per 50g ball; but the Kroy Socks only has 166 yards.  This meant that I would likely need two balls.  I wrestled with the decision, but finally gave in and bought two balls.

As I began making the gloves, I enjoyed seeing the interplay of color.  The yarn was enjoyable to work with, and I soon had completed a pair of gloves.  But it seemed like there was still quite a bit of yarn left.  It seemed such a waste not to use it for something!  And this started the creative juices flowing.  I mulled it over, and decided to try making a pair of knitted gloves with the remainder.  I made a gauge swatch, and selected a pattern stitch, then hopefully cast on.  After knitting ribbed cuffs, I switched to the pattern stitch, and shortly thereafter started the thumb shaping. 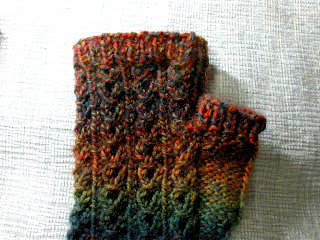 When I had completed the glove, I weighed it and the remaining yarn.  It would be close!  The completed gloves used up all but a short length of the yarn.  But what a satisfying feeling to get a second pair of gloves out of the two skeins of yarn!

﻿﻿
Sometimes frugality forces us to use our creativity.  If I hadn't been so frugal, I never would have created this second design.  Hooray for frugality!﻿﻿

I love how the crocheted fingerless gloves came out. the interplay of colors is so delicious!