The Predicaments of Pattern Production, or, The Frustrations of Fashioning a Finished Fiber Fabrication

After working all year on the same two patterns, I finally got both of them self-published.  You may wonder why it would take over half a year to get two patterns written up; I am asking myself the same question.
I guess the simple answer to this is modern technology (more specifically, computer programs, and my own ineptitude with them!).  In trying to create a pattern that looked “professional”, I had begun creating knitting charts in Excel, using the Aire River Knitting Font, and pasting them into my Publisher file as I created the pattern.  This works great, but I found earlier this year that when I would make a pdf of the chart, some of the lines on the chart would come out with uneven thickness (See the example below). 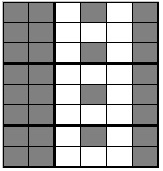 This is not horrible, but it bugged me that when I designed the charts in Excel, they looked fine, but when made into a pdf, they looked different.  This seemed to happen randomly, with different results at different times.  Adding to this problem was the fact that, in order to create the charts the way I wanted them, I needed to paste them into another program to tweak a few things before inserting them into my Publisher file.  This seemed to create even more problems.
It seemed like the three programs I was using didn’t interface very well with each other.  I tried many different ways to save the files and many different ways to insert them, but remained unsatisfied.  But eventually I found that, though my charts didn’t look perfect on the screen, they did seem to print up reasonably well.  So I decided to use the best ones, even though they still irritate me.
Another problem that hindered the production of these two patterns was that I decided to make some changes in the design as I went along.  Each time I made a change, I re-knitted the pattern, to be sure that I had written the instructions clearly and accurately.  This took additional time, effort, and focus.
In the first pattern, the Bavarian Twist Stitch Christmas Stocking,
Posted by Rebecca at 4:10 PM

I really feel your pain on this topic! Pattern writing is tedious and so many things can go wrong technically. It's so painful for me that it's the one thing I procrastinate about the most. I dream of being able to afford to hire test knitters, a tech editor, a technical illustrator, a graphic designer, and a photographer to do all the work. (A girl can dream, can't she?)

Anyway, I did recently find a new charting program, that works for both Mac and the PC and did not cost a bundle of cash. Wish I had more time to study it. Perhaps in the Spring, LOL.

Let me know how the new charting program works, Sharon! Although I am getting reasonably proficient in charting in Excel, if I could just get the charts to look the same in the finished pdf!