In anticipation of my son's upcoming marriage, I wanted to make something special for a wedding gift for him and his bride.  In the past, I have sometimes made a crocheted doily with the initials of bride and groom worked into the fabric, generally in filet crochet.  But somehow, I couldn't really envision my new daughter-in-law using a doily in her decor.  I debated whether to even try to make a wedding gift...there was not much point if they would not be able to use or enjoy it.  Then, I got an invitation to Anna's wedding shower.  It had a monogram with their initials entwined together...very lovely!  I didn't quite think I could reproduce it in filet crochet, though. 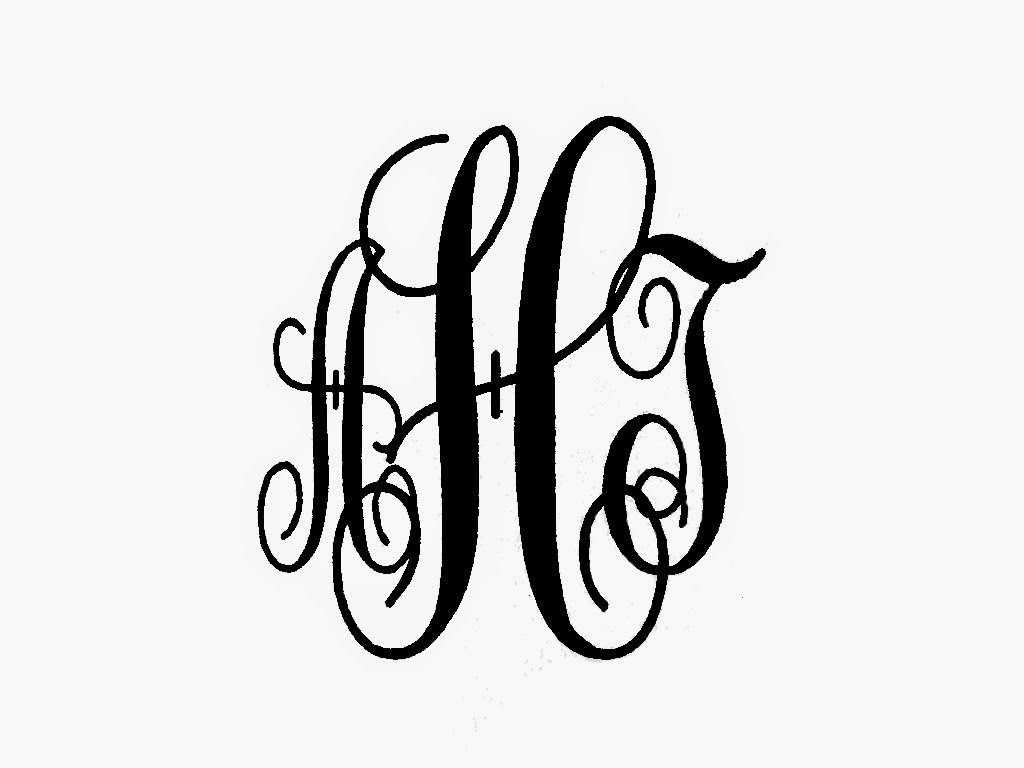 I mulled it over, keeping the invite close at hand so I could study it.  Maybe I could just do the letters in crochet?  That meant I would have to find a way to frame them, but it was a possibility.  I picked up a hook and thread, and started playing around, trying to create an "H" out of crochet.  It took several tries, but eventually I came up with something workable, based on the shape of the "H" in the monogram.

The uprights of the "H" were constructed of a crocheted mesh stitch, and I created the curlicues using an Irish Crochet technique which involved working single crochet over a padding cord, which could be drawn up to create curves.  On some of the curves, I worked a second row of padded single crochet, which allowed me to make curves in the other direction by increasing where I wanted the curves to be.

I wasn't totally pleased with the result, but I thought it might do.  But for the smaller initials on either side, I decided to try something different.  There is a technique that I came up with several years ago, a kind of chainless foundation, that utilizes cluster-type stitches stacked on top of each other.  I found that, if I worked this foundation row, I could work single crochet along one edge to shape it into the letter shape I wanted.  This worked quite well, and I was very pleased with the smaller initials.

Things were coming along with the crocheting, so I made a trip to my local crafts store to get some tips on framing a piece of crochet.  I brought a swatch along, just to be sure.  Amanda was very helpful and had lots of tips and suggestions for me, and even helped me find the least expensive options for the little bits and pieces that I needed to finish my framing project.  She suggested that I glue my velvet fabric backing onto foam core using a fabric-safe spray adhesive, and then stitch my crocheted pieces in place on the fabric-covered foam core using a needle and thread.  I ordered some spacers cut to fit the frame I chose, so that the crochet wouldn't be mashed up against the glass.

Back home again, I carefully wet-blocked the initials, trying to get the curves as smooth and round as possible.  That done, I laid it out on some dark fabric, to see how the crocheted pieces looked together. 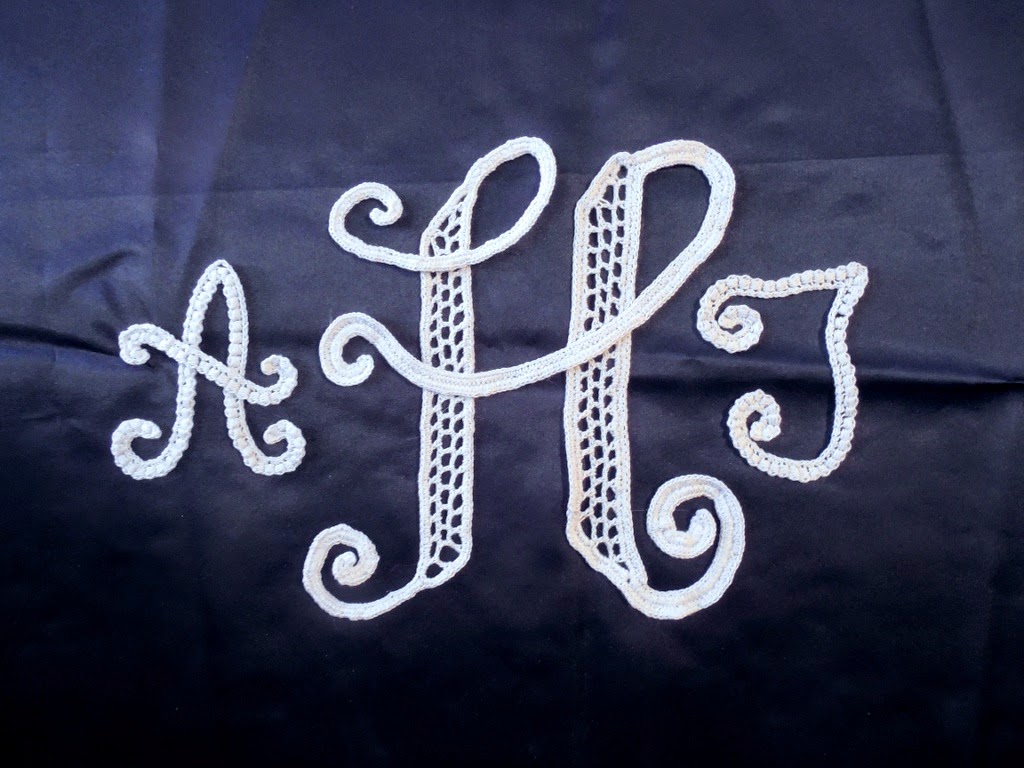 I played around with the arrangement a bit, and someone suggested that I place the left side of the "H" higher than the right side.  As I prepared to sew the initials onto the backing, I decided to see if I could intertwine the letters, somewhat like Anna had them in her monogram.  Here is the finished design: 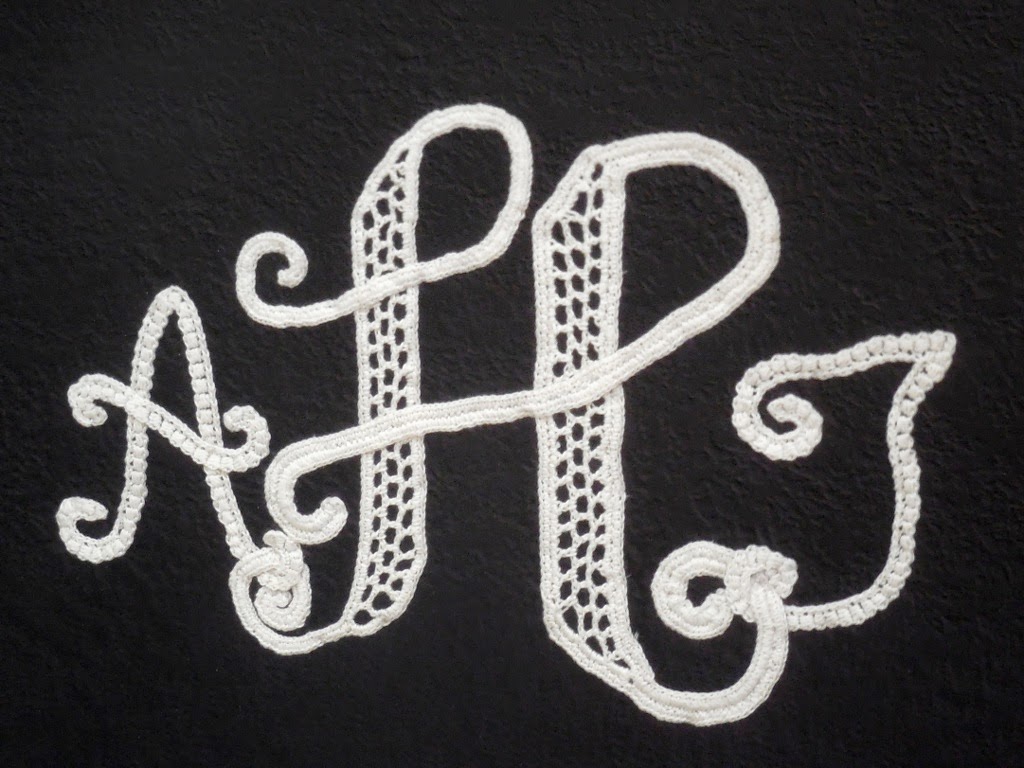 Even though it is not quite the monogram that Anna used for her wedding, she loves the piece and it is proudly displayed in their new apartment.  Here's a photo I took of the framed monogram before I wrapped it: 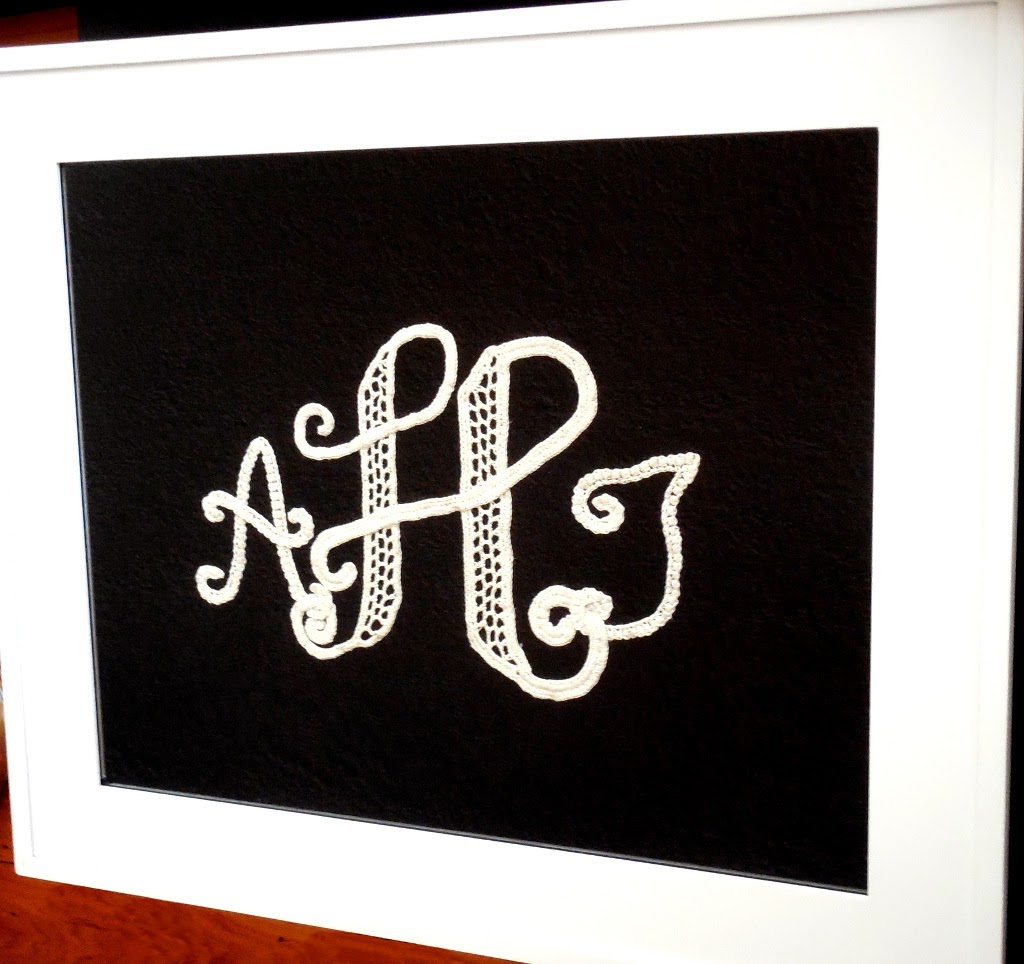 The exciting thing about this project (other than creating something special for loved ones!) is that now I know how to frame a crocheted art piece.  What next...perhaps some Irish crochet motifs?
Posted by Rebecca at 3:42 PM