A while back, I was looking at some Ravelry forum posts, and came upon a question about garter stripes.  It was pretty late, and I needed to be heading off to bed, but I thought, "I need to reply to this post!" as it was a question about how to make garter stripe fabric look the same on both sides.  This was the technique I had discovered, and it was important to let people know about it.

I wrote a short post about how I had been playing around with this technque, posted a photo of a scarf I had made, showing its reversability, and explained that I had been working on a scarf pattern that I hoped to publish soon.

I came back later, and there was just one comment to my reply...but it was someone whose name I well recognized, an expert on knitting technique who lives just a couple hours away.  I have been aware of Joan Schrouder for a number of years, running clear back to my days of lurking on the KnitList, an internet knitting community of sorts.  I was very impressed with Joan's posts; they showed a depth of knowledge about knitting that was impressive, but more than that, I sensed that she had a love of learning knitting techniques, and an almost scientific approach to solving problems. When others were getting emotional and defensive about their way being the best, Joan would step in and be the voice of reason.

Anyway, Joan showed a kind interest in the technique I had discovered.  She even suggested that, if I were going to the Black Sheep Gathering in Eugene in June, that she would like to meet with me.  My husband and I have never made it down to the BSG, but it seemed worth trying to get down there to meet Joan...so we made plans to meet her.

Joan was just as friendly and interesting in person as she is online.  I gave her a copy of my newly-published pattern, and showed her how to make a small swatch using the Double Garter Stripes technique.  We had a lively conversation about technique, and I asked her for counsel concerning my pattern.  All in all, it was a great visit, and I feel like I have made a new friend!

Thank you, Joan, for your kind interest in the technique, and for suggesting that we meet.  I'm so glad we did!  I had my husband commemorate the event with a photo. 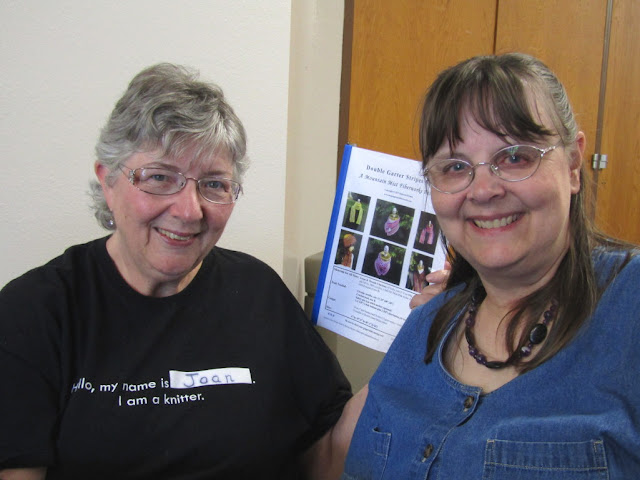