The Joy of Discovery, and the Frustration of Development 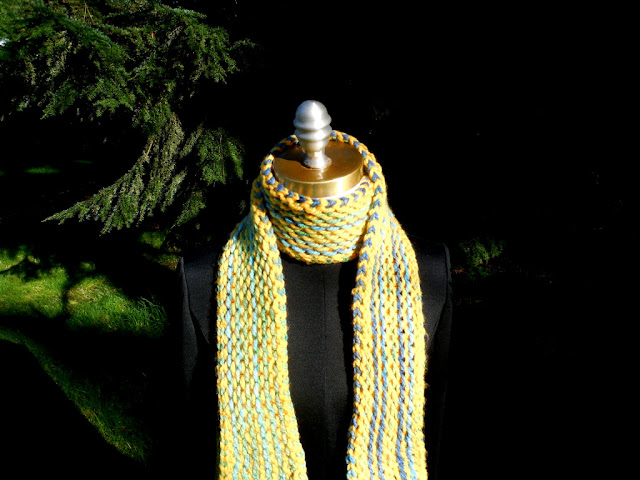 Over a year ago, I was playing with yarn and needles.  I like to try different techniques and stitches, and then experiment with different ways of doing things, in the hopes of finding some new, exciting technique.  Little did I know when I started out that day, that I would discover something truly remarkable!

I was playing around with a technique called Stranded Garter Stitch, from Jenny Dowde's Freeform Knitting and Crochet (described on pp. 145-146, and also in a project on pp. 107-110).  After working the stitch according to her instructions, I began trying it with variations.  Using a combination of slipped and knitted stitches, I was knitting happily along, enjoying the beauty of clearly delineated Garter-type stripes.  After working this way for a few rows, I turned the work, and--gasp--realized the the stripes looked the same on both sides!!

I began knitting again, this time making sure I recorded what I had done that had created this effect. The amazing thing was, that the technique was not particularly complex or intricate.  But I had never seen it done before.

I decided to design a scarf using this technique.  But I ran into a knotty problem when I tried to find a way to start and end the technique.  The cool thing about this technique is that it is reversible; yet, try as I might, I could not seem to find a way to begin and end the piece that looked the same (or at least somewhat similar) on both sides and symmetrical from the bottom to the top of the piece.  I must have done 25 or more swatches, trying to find a way to make it work.  I finally came up with something that (sort of) satisfied my requirements, and knitted several scarves as I worked on writing up the pattern.

I kept experimenting, though.  There had to be a better way!  In the meantime, I was devising a way to make a matching cap.  I tried short rows, which worked great, but because I wanted the cap to be reversible, too, I needed to graft it together invisibly.  I'm still working on that one!  I did figure out how to do the Double Garter Stripes technique in the round, and am working on a hat pattern now. Here is a sneak preview:

One day, as I was getting ready to knit yet another Double Garter Stripes Scarf, I decided to try a chain cast on, alternating the colors.  It worked!  And if I did it right, I found that it created an alternating chain on both sides of the fabric.  Best of all, I was able to start right in with the first row of the fabric, and by doing a similar technique for the bind-off, I was able to make a scarf that was more completely reversible than my previous attempts had been.

I've been working on writing up that pattern ever since, and finally got it all put together.  Here is a photo of the completed scarf, showing both sides so you can see how reversible this technique is. 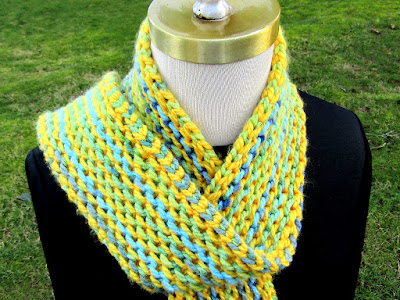 I have lots more ideas for uses for this technique!  It is a rhythmic stitch that is relaxing to work, and it creates a thick, warm fabric with lots of texture and color.  I hope you will give it a try!
Posted by Rebecca at 5:33 PM