Sometimes, my inspiration comes from playing around with a technique or an idea.  How can I change an existing stitch pattern to make it look the way I want it to?  I often spend a fair amount of time experimenting, trying different variations on a technique or a pattern before I am even half satisfied with the results.

This happened earlier this year, when I was knitting some cabled hats with the Saxon Braid cable pattern around the rim.  I wanted to make a scarf pattern to match the hat pattern I had designed, but I really, really dislike making scarves that are not presentable on both sides.  As most knitters are aware, most cable patterns look totally different on the back.  And the Saxon Braid pattern was no exception.

There is a technique for making reversible cables which do look the same on front and back--it involves working the cable over twice as many stitches, and working the cable stitches in a k1, p1 rib.  The cable is twisted in the normal manner (for example, a 4-stitch reversible cable is worked over 8 stitches, with four stitches crossed over 4).  When the fabric is knitted, the knit stitches pull to the front of the work, and the purls pull to the back, and you have a knitted cable on each side of the fabric.


I tried using this principle to knit the Saxon Braid cable, but it just didn't work.  The Saxon Braid is made up of six two-stitch columns that interweave across the braid panel, and I just couldn't figure out any way to easily do these crossings, some of which involve knit stitches crossing over purl stitches.  And the resulting fabric was quite unsatisfactory, anyway.

One day, as I was knitting a Saxon Braid Cap, I happened to notice something on the back of the fabric that piqued my interest.  An idea was born--and I soon found myself knitting a reversible scarf with the Saxon Braid pattern on one side, and a slightly different interlaced pattern on the other.  Woohoo!!


If you are curious about this technique, I have just published the Saxon Braid Reversible Scarf pattern.  It will be available in my Etsy shop, and on Ravelry! 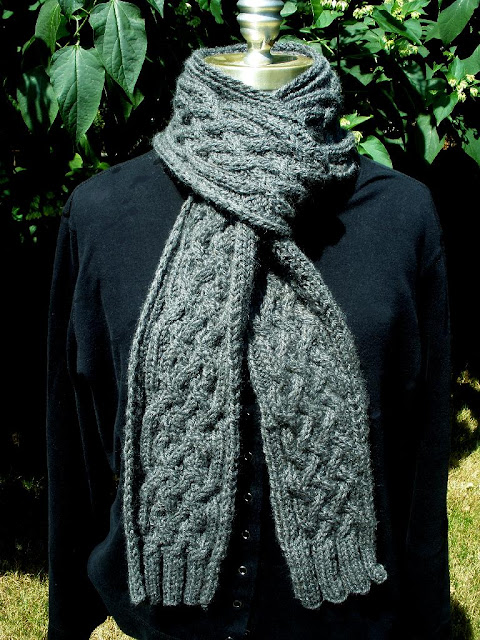 I hope to soon have some of these scarves listed in my Etsy shop, as well.

Great cable on the grey scarf! It looks equally good on both sides!

Thanks, Sharon...I'm pretty pleased at the way it turned out!